The day we put our big boy bunker pants on 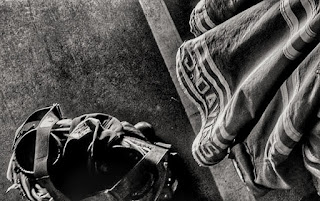 The other day, a fellow fireman wrote an open letter to a lot of our membership through a private social media platform. It really affected me. He wrote of the tough year we've had as a Fire Department with the number of deaths we've endured. He spoke of the calls he's attended over the past decade and how they affect us all at times. We lost Brother Brad Symes to suicide last July and too many others to Cancer this past year. I knew them all, one was my Captain for two years. It HAS indeed been a very sad year.

I haven't always received the best support from even the closest of my co-workers since going public in 2013. Some have been too busy telling me I should “find a new career” or move to a non-frontline job within the department. Others feel they need to “one-up” with their own tragedy or hardship. While even others make underhanded comments about how everyone just claims post traumatic stress nowadays to get time off or gain sympathy.

Except for two days to be assessed by a third party compensation board psychologist and two weeks of “vacation” after nearly killing myself, I haven't taken a day the entire six years I've dealt with all this. If someone finds the courage and time to tell you their story of hardship, DO NOT take it as an opportunity to show them it could “be worse” or to “one-up” them with your experiences. It's not the time. It's the quickest way to show them you're not really listening and that you're in fact not the person they should trust with their wounds. They've come to you out of trust; don’t break that. Maybe you're not doing it for those reasons, maybe you're actually realizing you're having trouble too and that you simply want to share as well. Maybe that will come later in the conversation, or another day. Listen and learn.

I’ve never looked for sympathy. I HAVE, however, looked for understanding. Not for me and my journey, but from others who are travelling the hard road and have yet to put their hands up for help. It is okay and right to not be able to deal with everything on your own. I know its in our blood to solve problems and always “figure it out no matter what happens”. It's our job, I get it. I also know that it does not work. I’ve been there, I tried, for years. Get over yourself. I did. I finally leaned on others and admitted I could not fix me alone. It still took a huge amount of self-will and effort to get where I am today. I still work at self-care daily and always will. Some days it’s as simple as hitting the gym hard to get out of a funk. Other days it's making a quarterly visit to my Psychologist for a “mental health check up”. I don't believe there’s a cure so to speak for mental health, especially as a first responder. It’s something we must work at daily to maintain, just like physical health.

I am forever grateful to this fireman who spoke out the way he did. I’ve always viewed him as one of “the cool kids”. To have someone like him speak up is groundbreaking. Seeing the support he has received is amazing. I’m proud to call him and all those supporting him my Brothers and Sisters. We are finally “getting it” and “getting over ourselves”. I’ve spoken many times how humility is the best trait and value a human can possess. It will get you so far in the world, especially in the fire service. We are finally putting our big boy bunker pants on.


We are all on the job for others, remember that when the trucks are in quarters and the doors are shut too.
Posted by Nothing Showing at 14:39